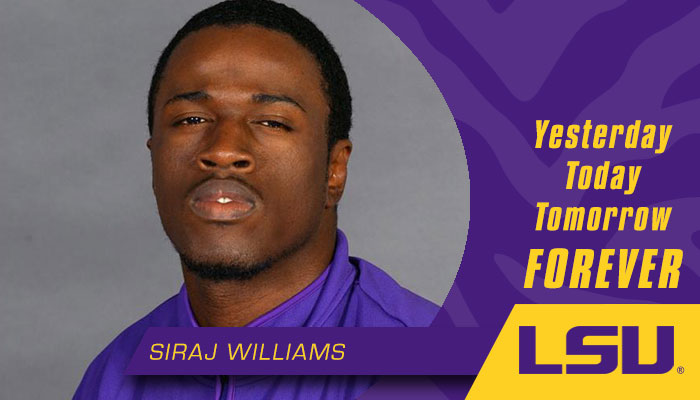 Siraj Williams born March 5 1984 in Willingboro New Jersey is a Liberian athlete who specializes in sprinting. He holds the country’s 400 meter record. He represented Liberia at the 2008 Summer Olympics, in the 400 meter dash. He was in the Men’s 400 meter dash, and did not advance past the heats stage. He also attended Louisiana State University where he became a four time all-American

Four-year letterwinner in track for coach Sandra Mitchell at the Cedar Hill High School … Ranked fifth in the nation and third in the state as junior in 2002 … Named a second-team all-district selection that same year … Also lettered three years in football … A member of his school’s honor roll.

Career
Enjoyed an outstanding career at LSU from 2004-07 … Won a national title and two SEC championships as a member of the Tigers’ outstanding 4×400-meter relay team … Also earned three All-America honors and a pair of All-SEC selections as a member of the 1,600-meter relay … Finished his career ranked No. 10 on the school’s all-time outdoor performance list in the 400 meters, clocking a personal best time of 45.77 in the final at the 2007 NCAA Outdoor Track and Field Championships … Received his lone individual All-America honor in the event during his senior season with an eighth-place finish at the national meet … Made three career appearances in the open quarter at the NCAA Mideast Regional Championships.

2006
Was a key reserve on LSU’s national championship 4×400-meter relay team that took first place at the NCAA Outdoor Championships with a time of 3:01.58 in the final heat … Ran the lead leg for the 4×400 team that won it preliminary heat at the NCAA Championships with a time of 3:03.50 … Individually, posted a personal best effort in the 400 meters with a time of 46.64 during the outdoor season at the LSU Alumni Gold on April 22 … Was an NCAA Mideast Regional participant in the outdoor season, finishing in 18th place at the meet after clocking a time of 47.13 … Also ran the 60 meters and 400 meters during the indoor season.

2005
Turned in a successful sophomore season, posting personal best efforts in both the 200 and 400 meters during the outdoor season … Clocked a top wind-legal 200-meter time of 21.77 at the LSU Alumni Gold … Recorded a top wind-aided time of 21.62 at the Bulldog Invitational … Personal best time of 46.67 in the 400 meters came at the Sun Angel Classic … Qualified for the NCAA Regional Championships in the event … Finished 15th overall with a time of 47.13 … During the indoor campaign, posted season-bests of 22.25 and 47.70 in the 200 meters and 400 meters, respectively.