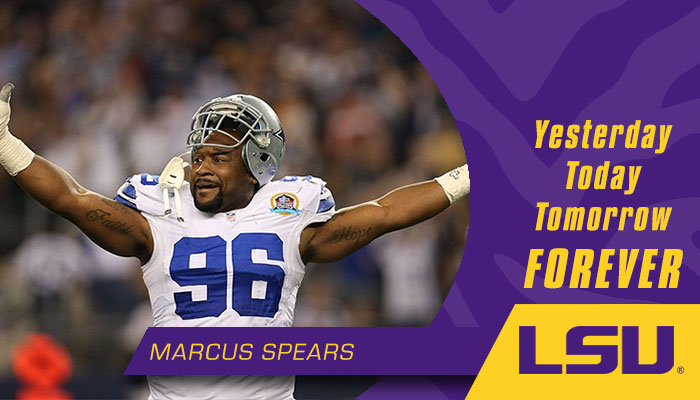 Marcus Raishon Spears (born March 8, 1983) is an American former college and professional football player who was a defensive end in the National Football League (NFL) for nine seasons. He played college football for Louisiana State University (LSU), and earned consensus All-American honors. The Dallas Cowboys drafted him in the first round of the 2005 NFL Draft, and he also played for the NFL’s Baltimore Ravens.

Spears was born in Baton Rouge, Louisiana. He was a highly sought-after two-sport athlete in the country following his senior season at Southern University Laboratory School in Baton Rouge. (The high school on the campus of the HBCU Southern University.) On the high school football field, he was rated as the No. 1 tight end prospect in America and the third-best overall prospect after earning high school All-America honors. He was named first-team Class 1A all-state selection on both offense and defense following his senior season, becoming the first player to be honored on both in Louisiana since 1991. He finished his final prep season with 28 receptions for 435 yards and three touchdowns and 245 rushing yards and six touchdowns on offense and 22 tackles for losses, 11.5 quarterback sacks and four fumble recoveries on defense. Spears was also one of the nation’s top basketball prospects. He played in the first ever U.S. Army All-American Bowl game on December 30, 2000.

Spears attended Louisiana State University, where he played for coach Nick Saban’s LSU Tigers football team from 2001 to 2004. He was initially recruited by LSU as a tight end, but was soon moved to the defensive line. Spears played tight end, fullback and defensive end as a freshman in 2001, recording two catches for 20 yards on offense and eight tackles, a sack and a tackle for loss on defense. His play earned him freshman All-Southeastern Conference (SEC) honors as a tight end.

The 2002 season marked his first as a full-time defensive player, in which he recorded 46 tackles, 16 quarterback pressures, 3.5 tackles for losses and three sacks. In 2003, during LSU’s national championship season, Spears contributed 49 tackles, 23 quarterback pressures, 13 tackles for losses, six sacks and six passes defensed to earn First-team All-SEC honors. Playing against the Oklahoma Sooners for the national championship in the Sugar Bowl, Spears returned an interception 20 yards for a touchdown to give the Tigers a 21-7 advantage in their 21-14 victory.

During his 2004 senior season, Spears put together a career year, earning first-team All-America honors from the Walter Camp Foundation, American Football Coaches Association, and AP, and second-team All-America honors from Sports Illustrated, first-team All-SEC honors, and was a semifinalist for the Bednarik Award and Lombardi Award. He finished the year tying his career-high in tackles (49) while setting career-highs for tackles for losses (17) and sacks (nine, a figure that ranks fourth in the LSU single-season records). He also recorded 21 quarterback pressures to help the Tigers finish the year third in the country in total defense.

The Dallas Cowboys entered the 2005 NFL Draft with two first round draft choices. Spears was considered by head coach Bill Parcells to be the key to the team’s eventual move to a 3-4 defense and wanted to take him with the first selection (11th overall pick). Owner/GM Jerry Jones overruled Parcells and drafted DeMarcus Ware instead, who the team thought would not be available later in the draft. Spears was eventually selected by the Cowboys with the 20th overall pick.

2005
Spears suffered from injury problems in his first two training camps. In his first training camp in 2005 as a rookie, He sprained his right knee and ankle while straining his calf. What could have been a serious injury was only a minor setback for him. He missed the first three preseason games but bounced back in time for the final preseason game and recorded three tackles and a sack.

He started the season as a backup in the team’s 4-3 defense and eased into a right defensive end starting role midway through the season, to earn All-Rookie honors from Pro Football Weekly. His 35 tackles were good for 12th on the team – third among linemen and rookies while his six quarterback pressures were fourth. He added 1.5 sacks and a pass defensed.

In his NFL debut at the San Diego Chargers, Spears was in the defensive line rotation but did not record a tackle. He recorded his first sack – one he split with Greg Ellis – and his first career tackle against the Washington Redskins. Spears then led all defensive linemen with four tackles at the San Francisco 49ers. He helped limit the Philadelphia Eagles to 129 yards, including just 19 rushing, the fourth lowest in franchise history. Spears earned his first NFL start at defensive end at the Seattle Seahawks and responded with three tackles and a batted pass while helping limit Shaun Alexander, the NFL’s leading rusher to 21 carries for 61 yards (2.9 avg.). He officially moved into the starting lineup full-time against the Arizona Cardinals and led all linemen with four tackles. Spears logged his third career start in Philadelphia and posted a season-high seven tackles to lead all linemen and finish second on the team. He had a three-tackle game at the New York Giants. Against the Kansas City Chiefs, Spears recorded four and a fumble recovery. With 1:16 remaining in the first half and Dallas trailing 14-10, Spears scooped up a Trent Green fumble at the Cowboys 15-yard line and returned it 59 yards to the Chiefs 26-yard line. Three plays later, Drew Bledsoe completed a pass to Jason Witten for a touchdown and a 17-14 halftime lead. It was the eighth-longest return in franchise history and the longest ever by a Dallas rookie. In Washington, Spears recorded three tackles. In the season finale against the St. Louis Rams, he recorded two tackles and his first solo sack of the season.

2006
Before the 2006 season, Spears underwent minor knee surgery to repair meniscus damage, which forced him to miss the first two weeks of training camp. The Cowboys moved to a 3-4 defense and Spears earned the starting role at left defensive end, finishing ninth with 48 tackles (31 solo), one sack, three pass deflections, two tackles for loss and tied for fifth on the squad with three quarterback pressures.

2007
In 2007, he appeared in all 16 regular season game and Dallas’ lone post season game. For the season Spears recorded 32 tackles (19 solo), two forced fumbles, and a career-high two sacks and three passed defensed on the season.

Spears played a key role in the playoffs, registering a tackle and three pressures in the wildcard playoff win against the Philadelphia Eagles, as the defense did not allow a rushing first down for the first time in postseason team history. He had a postseason career-high six tackles and a pressure in the divisional game against the Minnesota Vikings.

2010
After playing in only eight games (7 starts), his streak of 88 consecutive games played ended on November 10, when he was placed on the injured reserve list, with a left calf injury. Playing mostly in running downs, he registered 24 tackles (1 for loss) and 3 quarterback pressures.

2011
Spears signed a 5-year, $19.2 million contract during the off-season. He injured his groin in the second preseason game and missed the rest of the preseason.

New defensive coordinator Rob Ryan selected Kenyon Coleman and Jason Hatcher as the starters at defensive end, relegating Spears into a reserve role for the first time in his career. He was used mostly on running downs and registered 29 tackles (one for loss), 15th on the team and fifth among defensive linemen, one sack, two pass deflections and one quarterback pressure.

2012
In 2012, he again had a reserve role, but got a chance to start in six games because of injuries. Spears finished the season with 35 tackles (2 for loss) and 1 sack. He missed one game with a knee injury.

On March 13, 2013, Spears was released because of a degenerative knee condition and he was not seen as a good fit in the team’s plan to change to a 4-3 defense. While he never developed into a Pro Bowl player like fellow 2005 first-round pick DeMarcus Ware, he was durable, an excellent locker room presence and fulfilled his primary responsibility in the 3-4 defense, which was to create rushing lanes for the outside linebackers.

Spears was actively involved in community service projects during his time at LSU. His sister, Deidre was a three-year letterwoman on the basketball team at LSU, while starting two of those years for the Lady Tigers. As a rookie, Spears was a member of the Cowboys 2005 Rookie Club, a program designed to introduce rookie team members to community service in the Dallas area which included work with The Salvation Army, Children’s Medical Center Dallas and Meals on Wheels. In the spring, Spears was a co-chair, along with teammate DeMarcus Ware, for the second annual Taste of the NFL: The Ultimate Dallas Cowboys Tailgate Party at Abacus restaurant that benefited The North Texas Food Bank. The event raised enough money to provide 330,000 meals to North Texans in need.

In 2008 Marcus Spears donated $6,500 to a high school student by the name of Willie Forbes who was going on a trip to Europe for 21 days with People to People Student Ambassadors. In Europe, Willie visited France, Italy, and Greece. While in those countries, Willie visited sites such as the Eiffel Tower and the Parthenon. He and Marcus now share a great friendship.

In 2015 Marcus began hosting a TV show called “DFW Outdoorsman”[6] The show covers hunting, fishing, and other similar activities in the North Texas area. He is a regular contributor to the “Paul Finebaum Show”, broadcast daily on the SEC Network. He is affectionately referred to as “The Big Swagu”. In August 2014, Marcus started as cohost of SEC Nation, The SEC/ESPN Network’s flagship show. SEC Nation is a weekly college football preview show offering insight into upcoming national and SEC football games. Beginning with the 2017 College Football season Marcus began hosting “Thinking Out Loud” on the SEC Network with former University of Alabama quarterback Greg McElroy.