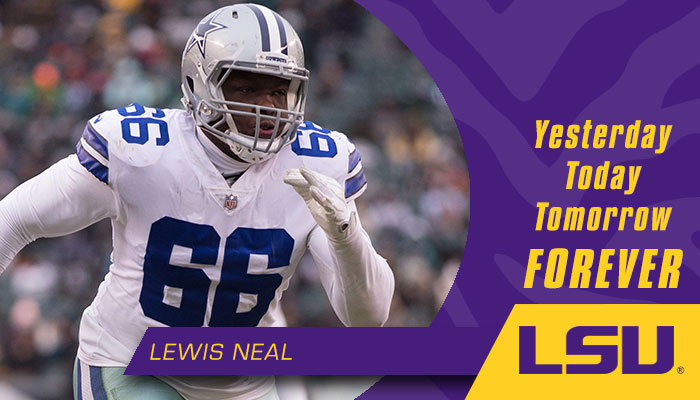 Lewis Matthew Neal (born May 17, 1995) is an American football fullback for the Dallas Cowboys of the National Football League (NFL). He played college football at LSU.

Neal attended James B. Hunt High School. As a senior he registerd 68 tackles, eight sacks and one safety. He played offense and defense at the All-American Bowl where he was named Defensive MVP. He was rated as a three-star recruit by Rivals.com.

He accepted a football scholarship from Louisiana State University. He was a backup defensive end as a freshman, and was a backup at defensive tackle the following year.

As a junior, he became a starter at defensive end, leading the team with eight sacks (tied for 10th in school history), while collecting 48 tackles (9.5 for loss), eight quarterback hurries and six passes defensed. He had a dominant game against the University of Florida, posting three sacks (tied for second in school history), 10 tackles (3.5 for loss), three quarterback hurries and one pass deflected.

As a senior, he started at defensive end in the team’s new 3-4 defense. He tallied 60 tackles (5.5 tackles for loss), 3.5 sacks and three quarterback hurries. He made a career-high 11 tackles in a 10-0 loss against the University of Alabama. He was a part of a defense that allowed only 16 touchdowns, while ranking second in the Southeastern Conference in scoring (15.8 points per game) and third in total defense (314.4 yards per game).

In his true freshman year in 2011, Collins played in seven games with no starts. In a total of 46 snaps on the offensive line, he posted five knockdown blocks and was recognized as a Freshman All-American by CBSSports.com after the season. As a sophomore, Collins started all 13 games for LSU, replacing Will Blackwell at left guard, and led the team in both total snaps (836) and knockdowns (64.5). He was named SEC Offensive Lineman of the Week after playing all 84 offensive snaps at #1 Alabama, helping the Tigers to compile 22 first downs, 139 yards rushing, and 296 passing against the nation’s No. 1 defense. Having played every offensive snap in LSU’s last eleven games, Collins earned honorable mention All-SEC honors by the Associated Press.

In his junior season, Collins was moved to left tackle, filling the void left by Chris Faulk. Quickly adjusting to his new position, he earned SEC Offensive Lineman of the Week honors after playing all but one snap in a 37–27 over Texas Christian in the season-opener. Collins went on the start twelve games at left tackle, only missing the Furman game in October. Louisiana State’s offense accounted for school-record 465.9 total yards per game, which included 200.8 rushing and 256.8 passing, and a school-record 37 rushing touchdowns.

Collins turned down an opportunity to enter the 2014 NFL Draft to return to LSU for his senior season. He started all 13 games at left tackle, leading the team in both offensive snaps (843) and knockdowns (88). The Tigers offense rushed for an average of 224.5 yards a game, the most by the team since averaging 256.6 in 1997. After the season, Collins was awarded the Jacobs Blocking Trophy, given annually to the top offensive lineman in the SEC as voted on by the league’s coaches, as the first LSU Tiger to win since Ciron Black in 2009. Collins was also voted First-team All-SEC by the league’s coaches and the Associated Press. Both USA Today and AP named him second team All-American.

Neal signed with the Dallas Cowboys as an undrafted free agent on May 12, 2017. He was waived on September 2, and was signed to the practice squad the next day. On November 8, he was promoted to the active roster to replace an injured Brian Price. Although he was considered undersized for the position, he was used as a backup defensive tackle in seven games.

Neal is an entrepreneur, owning a barber shop in college. He is also a co-owner of a financial investment firm on the foreign exchange and of a cyber security company.