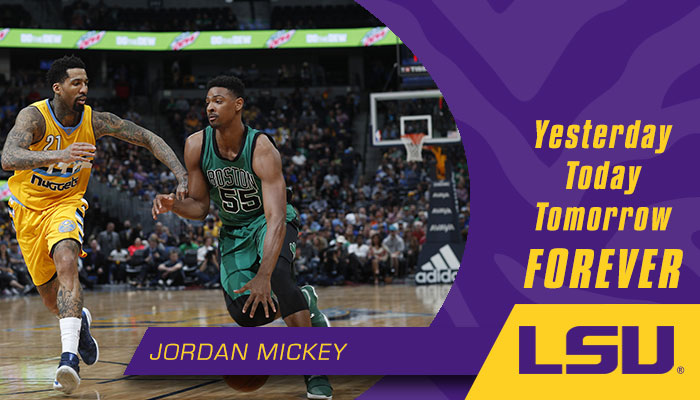 Jordan Grayson Mickey (born July 9, 1994) is an American professional basketball player for the Miami Heat of the National Basketball Association (NBA). He played college basketball for Louisiana State University before being selected by the Celtics with the 33rd overall pick in the 2015 NBA draft.

Mickey attended Arlington Grace Prep for three years, guiding the program to a state championship during his junior season, before transferring to Prime Prep Academy in 2012. During his lone campaign with Prime Prep in 2012–13, he averaged 16 points, 10 rebounds and two blocks per game. Considered a four-star recruit by ESPN.com, Mickey was listed as the No. 12 power forward and the No. 38 player in the nation in 2013.

Mickey was an immediate contributor when he began his freshman season at LSU in 2013–14, compiling double-doubles during each of his first three contests. He started all 34 of the Tigers’ games and averaged 12.7 points and 7.9 rebounds per game. He also became just the second Tiger in program history to block at least 100 shots in a season, joining Shaquille O’Neal. He earned multiple awards in 2013–14, including Coaches All-SEC Second Team, All-SEC Freshman Team, All-SEC Defensive Team, LSWA Louisiana Freshman of the Year, and LSWA All-Louisiana Second Team.

As a sophomore in 2014–15, Mickey led the nation in blocked shots per game (3.6), along with 15.4 points and 9.9 rebounds. He blocked at least six shots in four straight contests from December 18 through January 3. He did, however, suffer with lingering shoulder and ankle injuries throughout his sophomore year, but played through the pain. In the second round of the NCAA Tournament, he tallied 12 points, 14 rebounds and six blocks, but the Tigers were edged by North Carolina State, 66–65. He again earned multiple awards in 2014–15, including Coaches All-SEC First Team, AP All-SEC First Team, All-SEC Defensive Team, All-District NABC Team, and All-District USBWA Team.

On March 31, 2015, Mickey declared for the NBA draft, forgoing his final two years of college eligibility.

Boston Celtics (2015–2017)
2015–16 season
On June 25, 2015, Mickey was selected with the 33rd overall pick in the 2015 NBA draft by the Boston Celtics. On July 20, he signed with the Celtics after playing for the team at the Utah and Las Vegas summer leagues. Over the first two and a half months of the 2015–16 season, Mickey spent the majority of his time in the NBA Development League playing for the Maine Red Claws, Boston’s affiliate team in the D-League. Between October 28 and January 18, he played three games for the Celtics and 21 games for the Red Claws.

On January 5, 2016, Mickey was named the NBA Development League Player of the Month for December 2015, becoming the first player in Red Claws franchise history to receive Player of the Month honors. Mickey led Maine to a 7–2 record (6–2 in games that he played) and averaged 19.6 points, 10.5 rebounds, 5.3 blocks and 1.8 assists per game. On December 6, he scored a season-high 32 points and grabbed 13 rebounds in a 110–97 win over the Erie BayHawks, and on December 31, he recorded a triple-double with 13 points, 13 rebounds and an NBA D-League season-high 10 blocks in a 119–112 win over the Texas Legends. On January 18, he was recalled by the Celtics after he sprained his ankle two days prior while playing for the Red Claws. On January 29, he was named in the East All-Star team for the 2016 NBA D-League All-Star Game, becoming the 13th player in Red Claws’ history to land an All-Star honor. However, he was ruled out of the All-Star game due to his left ankle injury and was replaced in the East team by Keith Benson. Mickey went on to play in seven of the Celtics’ 10 games post All-Star break, receiving limited minutes. During this stretch, he recorded a season-best three blocked shots in under two minutes of action against the Memphis Grizzlies on March 9. The following day, he returned to the Red Claws for the first time since January 18 for a one-game stint. He received three more assignments to Maine on March 13, April 5 and April 7. In 25 games (23 regular season, two playoff) for Maine in 2015–16, he averaged 17.8 points, 10.2 rebounds, 1.2 assists and 3.9 blocks per game.

2016–17 season
Mickey appeared in eight of the Celtics’ first 19 games of the 2016–17 season. During that stretch, he scored a season-high eight points on 4-of-4 shooting in 19 minutes against the Denver Nuggets on November 6. On January 11 against Washington, Mickey made his first career start as a replacement for the injured Amir Johnson. In 14 minutes, he recorded four points, two rebounds, one assist and one block in a 117–108 win over the Wizards. During the 2016–17 season, he received multiple assignments to the Maine Red Claws, the Celtics’ D-League affiliate.

Mickey is the son of James Wright and Torand Hunter. His father played center for Abilene Christian University and was the Lone Star Conference MVP in 1984–85.