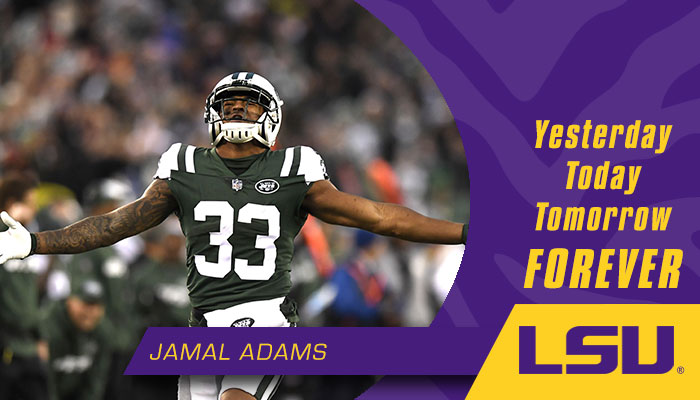 Jamal Lee Adams (born October 17, 1995) is an American football strong safety for the New York Jets of the National Football League (NFL). He played college football at LSU, and was drafted sixth overall in the 2017 NFL Draft by the Jets.

Adams attended Hebron High School in Carrollton, Texas. During his final two years, he had 138 tackles and seven interceptions on defense and 20 touchdowns on offense. In his senior year, Hebron finished 8–4 on the season, advancing to the UIL 5A Division II Area final at AT&T Stadium, where they lost 42–21 to Cedar Hill.

Adams was rated by Scout.com as a five star recruit and was ranked among the top ten overall recruits in his class. He committed to Louisiana State University (LSU) to play college football.

Adams played in all 13 games with two starts as a true freshman at LSU in 2014 and had 66 tackles and a sack. As a sophomore, he was a second-team All-Southeastern Conference selection as a safety by the Associated Press (AP) and SEC coaches. As a junior, Adams was named to the AP All-SEC first team.

On January 6, 2017, Adams announced that he would forgo his senior season and enter the 2017 NFL Draft.

Coming out of college, Adams was invited to the NFL Combine and performed all the required drills. On May 4, 2017, Adams attended LSU’s pro day and opted to run the 40-yard dash (4.40s), 20-yard dash (2.57s), and 10-yard dash (1.58s) and was able to improve on his combine numbers. He was projected to be a first round pick by the majority of analysts and scouts. Sports Illustrated, DraftScout.com, Pro Football Focus, and ESPN ranked Adams the top safety in the draft.

The New York Jets selected Adams with the sixth overall pick of the 2017 NFL Draft. He was the first defensive back selected in 2017.

He made his professional regular season debut and first career start in the New York Jets’ season-opener at the Buffalo Bills and recorded five combined tackles and deflected a pass in their 21–12 loss. Adams made his first career tackle on running back Mike Tolbert after his 13-yard run on the Bills’ first drive. On September 24, 2017, Adams recorded two solo tackles, broke up a pass, and made his first career sack on quarterback Jay Cutler during a 20–6 win against the Miami Dolphins. In Week 17, he collected a season-high ten combined tackles (three solo) and a pass deflection in the Jets’ 26–6 loss at the New England Patriots. He finished his rookie season in 2017 with 83 combined tackles (63 solo), six pass deflections, and two sacks in 16 games and 16 starts.

His father, running back George Adams played in the National Football League (NFL) from 1985 to 1991.