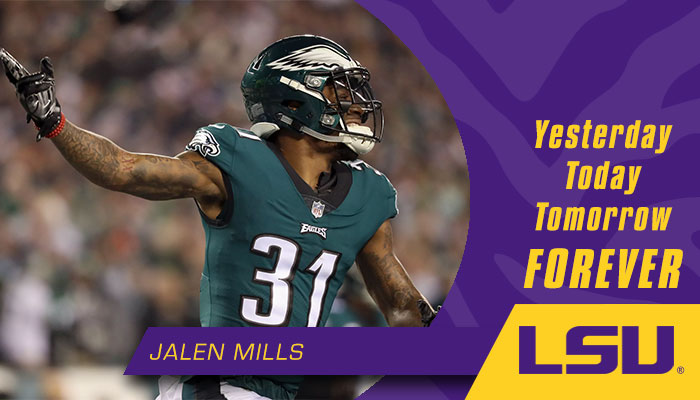 Jalen Mills (born April 6, 1994) is an American football cornerback for the Philadelphia Eagles of the National Football League (NFL). He played college football for Louisiana State University and was drafted by the Eagles in the seventh round of 2016 NFL Draft.

Mills attended Lancaster High School in Lancaster, before transferring to DeSoto High School in DeSoto, Texas for his senior year. In 2011, Mills registered 26 tackles, one interception, and six pass breakups, helping the DeSoto Eagles to a 10–2 record and a second-round UIL 5A Division 1 playoff appearance, where they lost 41–31 to Dallas Skyline. Mills was rated by Rivals.com as a three-star recruit and committed to Louisiana State University (LSU) to play college football under head coach Les Miles.

Mills started all 13 games at cornerback his true freshman year at LSU in 2012, recording 57 tackles and two interceptions. As sophomore in 2013, he again started all 13 games, recording 67 tackles, three interceptions, and three sacks. As a junior in 2014, he started 12 games at safety and one at cornerback. He finished the season with 62 tackle and one interception. As a senior in 2015, Mills missed the first six games due to injury. Despite the missed time, he was named a 2015 All-American by CBS Sports.

Coming out of LSU, Mills draft projection varied as NFL draft experts and scouts were split. NFL analyst Mel Kiper, CBS Sports, and other draft analysts projected him to be selected as early as the second or third round, while others projected a sixth or seventh round selection. Although he was thought as a top draft pick during his junior year, his stock fell when he suffered a fractured fibula and tore ligaments in his ankle in August 2015. He received an invitation to the NFL combine and completed all of the required combine drills. His 40-yard dash time was mediocre and tied for 33rd among all defensive back prospects. On March 14, 2016, he participated at LSU’s pro day and opted to have another attempt at the 40, 20, and 10-yard dash. Mills raised his draft stock after lowering his 40-yard dash time (4.48), but wasn’t able to greatly change his combine numbers in the 20 and 10-yard dash. All 32 NFL teams were represented by coaches and scouts to watch Mills, Deion Jones, Vadal Alexander, Lamar Louis, Jerald Hawkins, Quentin Thomas, Reid Ferguson, and five others perform drills at LSU’s pro day. He was ranked the eighth best cornerback prospect by Sports Illustrated and the ninth best cornerback by NFLDraftScout.com.

The Philadelphia Eagles selected Mills in the seventh round (233rd overall) of the 2016 NFL Draft.[14]

On September 11, 2016, Mills made his professional regular season debut in the Philadelphia Eagles’ season-opener against the Cleveland Browns and he recorded two solo tackles in the 29–10 victory. The following week, Mills collected a season-high six solo tackles and defended a pass during a 29–14 win over the Chicago Bears. On October 16, 2016, he earned his first career start and recorded a season-high seven combined tackles and two pass deflections during a 20–27 loss to the Washington Redskins. Overall, he played in all 16 games with two starts as a rookie, recording 61 combined tackles (51 solo) and seven passes defensed.

On September 10, 2017, Mills recorded nine combined tackles, two pass deflections, and made his first career interception off of a pass attempt by Kirk Cousins during a 30–17 win against the Washington Redskins in the Eagles’ season-opener. He made the interception in the end-zone and returned it for 15-yards. In a Week 3 matchup against the New York Giants, Mills recorded a season-high 12 combined tackles and deflected two passes in a 27-24 victory. On October 12, 2017, in Week 7, Mills collected four combined tackles, deflected a pass, and intercepted a pass attempt from Cam Newton in a 28–23 win over the Carolina Panthers on Thursday Night Football.

On October 29, 2017, in Week 8 against the San Francisco 49ers, Mills recorded three combined tackles, a deflected pass, a tackle for a loss, and intercepted a pass attempt that he returned for a touchdown. For this, he was named NFC Defensive Player of the Week.

On January 21, 2018 in the NFC Championship Mills has 3 tackles, one pass deflection and only gave up two passes for 27 yards in the Eagles’ 38–7 rout of the Minnesota Vikings. Mills appeared in his first career Super Bowl and the Eagles’ 3rd appearance in franchise history, which they would later win against the Patriots, 41-33

On June 10, 2014, Mills was arrested by Baton Rouge Police for a charge of second degree battery from an occurrence with a woman that happened on May 4, 2014. He allegedly punched a woman he was romantically involved with in the mouth at his apartment on near LSU. His parents bailed him out of East Baton Rouge Parish jail the following day, paying the $10,000 bond. The charges were ultimately dropped and reduced to a misdemeanor. He was sentenced to complete a pre-trial diversion program where he was forced to comply with drug tests, go under a psychiatric evaluation, and pay $1,000 of the victim’s medical bills. Mills denied the allegations and said it was his girlfriend that he was involved with that assaulted the victim. His girlfriend, who was not identified, admitted to assaulting the victim.