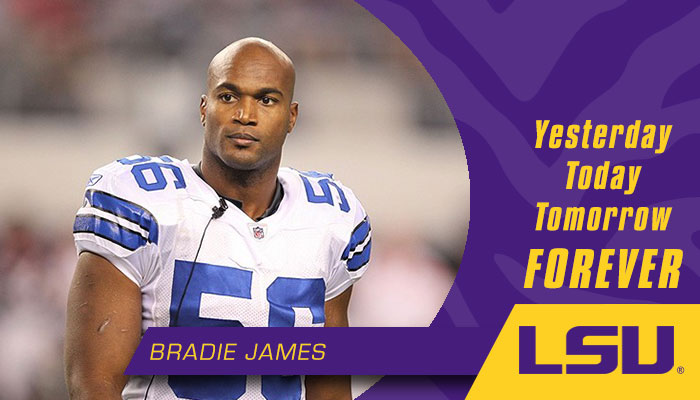 Bradie Gene James (born January 17, 1981) is a former American football linebacker in the National Football League for the Dallas Cowboys and the Houston Texans. He played college football at Louisiana State University.

As a freshman (1999), he was named the starter at weakside linebacker, posting 41 tackles, 3 sacks, and one interception. The following year, he recorded 110 tackles (second on the team), five sacks (led the team) and was named the Defensive MVP of the 2000 Peach Bowl.

During his junior year, LSU’s defense was dubbed “the James Gang defense”, a term applied to the unit largely because of his leadership. That year, he had 113 tackles (second on the team) and three sacks.

In his final season at LSU, James was the team captain of the defense and was moved to middle linebacker, recording 154 tackles (an LSU single season record), 3 sacks, and one interception. He also was the first LSU linebacker to achieve All-SEC honors two years in a row since Warren Capone (All-SEC 1972, 1973). James was named a National Scholar Athlete and a member of the SEC Academic Honor Roll. He finished second on the school’s all-time career tackle list with 418 tackles. He also posted 14 sacks, 33 tackles for loss, 29 quarterback pressures, 8 passes defensed, 4 forced fumbles, 2 fumble recoveries and 2 interceptions.

Dallas Cowboys
James was selected in the fourth round (103rd overall) of the 2003 NFL Draft by the Dallas Cowboys. He was the sixth middle/inside linebacker taken, behind Nick Barnett of Oregon State, Kawika Mitchell of South Florida, Gerald Hayes of Pittsburgh, Cie Grant of Ohio State, and Angelo Crowell of Virginia.

He backed up Pro Bowl outside linebacker Dexter Coakley in a 4–3 defense during his first two seasons in the league, while showing playmaking ability as a special teams performer. In 2003, he was fourth on the team with 16 special teams tackles and the next year he led the team with 24.

In 2005, the Cowboys changed to a 3–4 defense, allowing him to have a breakout year, while making the transition from special teams player to starting middle linebacker to lead the Cowboys with 109 tackles. In 2008, James became only the second Cowboys defender (Eugene Lockhart – 222 in 1989) to reach 200 tackles in a season (202 tackles).

James was the first player to lead the Cowboys in tackles for more than three straight seasons, eventually reaching a total of six consecutive years, the longest streak in franchise history. He also had a streak of 5 straight seasons with at least 100 tackles, that ended after the 2010 season.

He only missed two games in his Cowboys career (because he was deactivated as a rookie) and dealt each season, with the uncertainty of who would start at the other inside linebacker position, having to play with different teammates that included: Scott Shanle, Akin Ayodele, Zach Thomas, Keith Brooking and Sean Lee.

In 2011, with the emergence of Lee, James and Brooking split snaps at the other inside linebacker spot. At the end of the season, the club decided not to re-sign him, leaving as its sixth career leading tackler.

Houston Texans
After the Houston Texans traded DeMeco Ryans to the Philadelphia Eagles, they signed James to a one-year contract on April 12, 2012, reuniting with defensive coordinator Wade Phillips, who was his head coach with the Dallas Cowboys. He started 15 games (missing one with a hamstring injury), finished third on the team in tackles (77) and called all of the defense’s signals/audibles. He wasn’t re-signed after his contract expired at the end of the year.

After being out of football for a year, on May 6, 2014, he signed a one-day contract to retire with the Dallas Cowboys.

In 2006, James was the co-host of “Inside The Huddle”, a one-hour player commentary show that aired live on sports talk radio in Dallas along with quarterback Tony Romo. He is a member of Omega Psi Phi fraternity. He was married on May 30, 2009.

Foundation 56 is a tribute to Bradie’s mother Etta, who died from the disease in 2001. Bradie often says if there had been the types of services offered because of Foundation 56 his mother would still be alive.