The Dallas Chapter is one of the largest LSU Alumni Chapters outside the state of Louisiana. Our Chapter consists of several hundred individuals and families around Dallas, Ft. Worth, the Mid-Cities, Denton, Lewisville, Plano, Carrollton, The Colony, Allen, McKinney, etc. The Board of Directors meets monthly to plan and execute our activities, publish the quarterly newsletter and fund scholarships for LSU students. We actively support LSU’s outreach program to area high school students considering attending an out-of-state university. 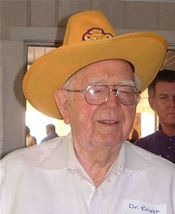 Dr. William Knight is one of the founding members of our chapter. We asked for a little history since they didn’t take meeting minutes in those days. Dr. Knight was kind enough to write it all down. Here is our history, in Dr. Knight’s own words:

In late 1945, I was back at LSU after spending 2 years in the Army. I had decided that I wanted to become a dentist, but LSU did not have a dental school. The only dental school in LA was Loyola in New Orleans. I went there for an interview and had planned to enroll, but they were on a 4 year program, and I found out that Baylor Univ. Dental College was on a 3 year program. That brought me to Dallas.

In late 1946 it was announced that LSU was coming to the Cotton Bowl to play Arkansas on Jan 1, 1947. In December of 1946 I received a call from some lady who invited me to come to a meeting to form an Alumni Chapter. Only 4 of us attended. She had gotten some forms to fill out and also the names of some alumni living in Dallas so we got busy telephoning and put together a dinner party a night or so before the game. It was at the Adolphus Hotel. The speaker was Bernie Moore, the LSU coach. The game was played in sleet and snow (scoreless). Y.A. Title was the quarterback, and one of our present members (Wren Worley) played in that game.

For the next few years we would have meetings in our homes. They would always be on a Saturday night when LSU was playing. That was before TV so we would have numerous radios – all tuned to WWL.

In 1962 LSU came to the Cotton Bowl to play Texas (WON, TOO!). Our club rented the Women´s Building at Fair Park and held a big reception the morning of the game. We had half of Louisiana in there – and even MIKE THE TIGER! When LSU would play Rice in Houston, we would team with the Houston Alumni Club and hold a reception before the game. General Troy Middleton was the President at that time and would always attend.

In the 60´s, Dr. John Hunter succeeded General Middleton as President. His wife´s sister (Evelyn) lived in Dallas and she and her husband Clayton Sanders were members of our chapter. The Hunters often came to Dallas to visit the Sanders, and when they were here, we would hold a reception in someone´s home for them. We considered Dr. and Mrs. Hunter members of our chapter – they were so pleasant.

I was President for several years during the 60´s. The LSU magazine featured an article about me and two of my cousins. We were President of the Dallas/Ft. Worth, Franklin Parish and Vidalia-Natchez chapters all at the same time.

In 1966 LSU came back to the Cotton Bowl to play Arkansas (WON AGAIN!). The night before the game, we held a reception at a downtown hotel. Governor John McKeithen was there, and Col Fred Burley and I drove him to the airport.

I am the only one of the original 4 still around. The chapter has named a scholarship for me – I am so appreciative. They also have one named after Col. Fred Burley, another faithful member. Over the years, we have had about every President, Chancellor, Coach and other officials from LSU to visit our chapter.

These are just some of the things that this old 83 year old “Tiger” can recall. In the early years, no minutes or records were kept.

WANT TO MAKE A DIFFERENCE?

Become a Sponsor for the LSU Alumni Dallas Chapter